We’ve all been there. You wake in the middle of the night screaming, “Crap, I forgot to pay the credit card bill!”

Whether it’s the credit card bill, the cable bill or any of the dozen or so recurring monthly debts we all have, everyone has missed a payment or two…or three.

Paying late might not be a big deal once in a while but it’s a problem for a lot of people. Just missing a payment can double your interest rate when accounting for those late fees and can ruin your credit score, costing thousands in future interest.

There are ways you can avoid paying late and other steps you can take to reduce the effect of missing a payment. Understand why people miss payments and what you can do when it happens.

I think I invented every excuse for missing payments and paying late when I was in my early 20s, from car troubles to changing checking accounts. The truth is that most of the reasons people pay bills too late come down to one of three problems.

Even with a budget, it can seem impossible to set aside enough money to pay all your bills. Money sitting in your checking account begs to be spent even if you know it has to go to paying the rent due next week. If your bills aren’t timed right with your income, there are two things you can do to match things up:

Setting your bills on automatic withdrawal helps to avoid forgetting but it also risks overdraft fees if you don’t have the money in your checking account when the withdrawal goes through. I typically get paid twice a month so I set all my bills to be paid or due in one of the two following weeks. An email reminder alerts me with an email and the bills that need to be paid that week.

What Happens when You Miss a Payment?

There’s three ways that paying late can absolutely wreck your finances. They range from minor nuisances to things 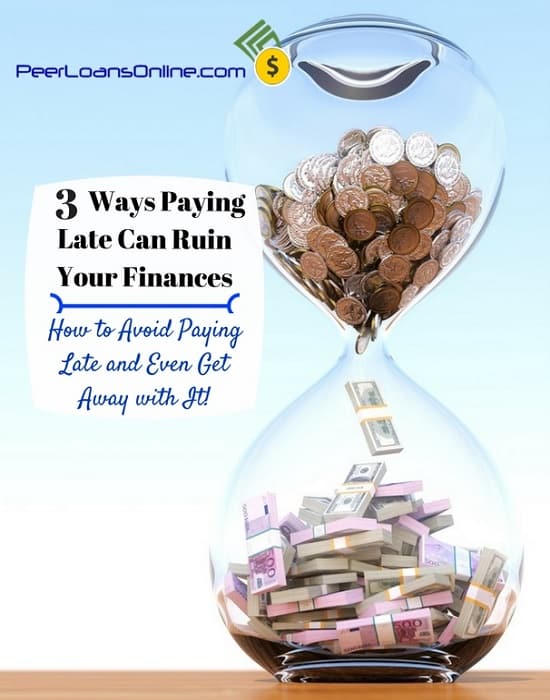 that can cost you thousands of dollars down the road.

Paying late less than 30-days isn’t usually reported but you will still face hefty late fees. A late fee of $15 may not seem too bad but it amounts to an extra 36% on a $500 credit card balance.

Waiting longer than 30-days to make your payment and you’ll risk ruining your credit score as well. Paying later than 30-days past due will be reported on your credit report and can stay there for years, making it harder and more expensive to get another loan.

Worse still, wait longer than 60-days to make a payment and it may be sent to a collection agency. That could mean even more fees and a bigger hit to your credit score.

What to do NOW instead of paying late

Besides just getting your due date on bills adjusted to better match your income, there are a few things you can do to help keep from ruining your financial life with missed payments.

If you think you can make the payment within a week or so after the due date, call the company to work something out. Most companies will offer a one-week extension and will even waive the late fee if it’s your first missed payment. Don’t be shy about asking, especially if you have a good history of making on-time payments.

One of the best steps you can take to stop paying late is to consolidate your bills into one monthly payment. Instead of having a dozen or so bills to pay, take out one personal loan to pay them all off. That means you’ll only have one bill to pay each month instead of many.

An added bonus to debt consolidation is that you can often lower your interest rate on loans. Just lowering your rate 5% can save you hundreds of dollars a year by paying off high-interest card balances. You’ll also avoid those late fees that add up each month.

I’ve used Personal Loans to consolidate my debt and recommend them as one of the easier debt consolidation companies with which to work. You can check your interest rate online free and without hurting your credit score.

Click to get instant approval for a consolidation loan up to $35,000

If there is absolutely no way out from missing payments, then you might be able to get on a hardship program. Most of the credit card companies offer hardship payments which are something like debt negotiation but directly with the creditor.

Under a hardship program, the credit company will usually extend the repayment period so your monthly payments are lower. The problem with this is that you’ll still pay interest each month and paying longer means you’ll pay more interest over the long-term. The company will also probably cancel your card which means you won’t be able to use it and it will reduce your credit score from card cancellation.

Too many people avoid dealing with missed payments and just hope the problem will work itself out. Sorry but it’s one of those things that isn’t just going to go away.

The good news is that there are things you can do to avoid paying late or reduce the effect of missing a payment. Whether you call creditors quickly to work something out or apply for a consolidation loan, working to solve the problem can save you a lot of money in interest and mean fewer headaches in the long run.