Even the pros make debt mistakes, more important is what you do when debt missteps happen

Maybe you’re more familiar with the saying ‘shit happens’ but you could easily replace it with ‘debt happens’ and be just as correct.

We’ve all been there. You have a financial emergency and end up maxing out your credit cards. Christmas comes around and maybe you are a little more generous with the gifts than you should have been. Maybe you just give in to the billions spent on product advertising and splurge a little.

We all make debt mistakes. What’s important is what you do when it happens.

To prove the point, I reached out to three personal finance pros for their biggest debt mistakes. The three financial bloggers I talked to are three of the most respected in debt, investing and mastering your money but guess what…

Three Debt Mistakes of the Pros

Even the pros make debt mistakes

Our first debt mistake comes from Grayson Bell of Debt Roundup. The blog shares Grayson’s journey getting out of nearly $75,000 in debt with everything he learned about paying off debt, saving money and investing.

Summer always reminds Grayson of how his life changed in 2006, the year he graduated college. The transition to adulthood brought bigger paychecks but even bigger spending.

One day, after being goaded by a radio ad, he decided to reward himself by buying a jet ski. The payments would only be $69 a month…so why not? After adding a trailer, the total purchase came to $10,500 of which he only paid off $2,484 over the next three years with the minimum payments.

Payments jumped to $200 a month after the three-year teaser period. An amount Grayson couldn’t afford and he was forced to sell his new toy.

Lesson Learned: There are quite a few here. Understand that the minimum payment isn’t necessarily the one that gets you out of debt.

A post by Robert Farrington of The College Investor caught my eye while writing this article. Robert runs one of the best blogs around on student loan debt and some of the worst debt mistakes students make while still in school. 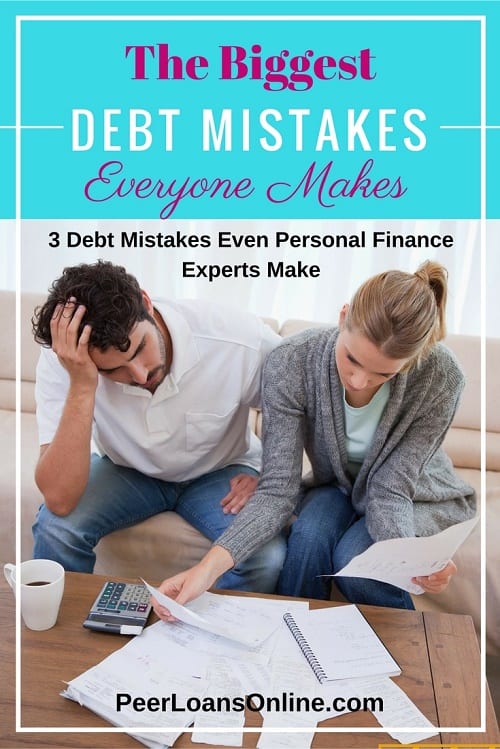 One of the biggest debt mistakes Robert points out is abuse of student loan borrowing and it’s one to which I can definitely relate.

I’m almost 40 years old and still have just over $60,000 in student loan debt from two bachelor’s degrees and a master’s program. Want to know the actual cost of tuition for all that?

The problem is that I was able to borrow much more than I needed each year through the FAFSA and other loan programs. I took as much as I could thinking the interest rate was low enough that I could get a better return by investing the rest.

I refinanced my student loan debt at 2.75% in 2003 so I’m not too worried about the amount I still owe. In fact, I’ve taken a few years since graduating on the income-based repayment plan and had to pay almost nothing back.

But the money will need to be repaid and I didn’t invest all that I thought I would. It’s a debt mistake that trips up a lot of otherwise rational people.

Lesson Learned: Just because you can borrow more, even at a low interest rate, doesn’t mean you should.

Our final debt mistake is from JD Roth, the Money Boss, and comes from a coast-to-coast RV trip he took earlier this year.

This one isn’t JD’s debt mistake but a great read called Lifestyles of the Rich and Foolish. Rolling through North Carolina, he came across the Biltmore Estate, the largest home in the United States at 179,000 square feet and 250 rooms.

What struck me about the story is that George Washington Vanderbilt II started construction on the house when he was just 26 years old. He ended up paying $5 million to build it out of his $7 million inheritance.

The house cost him almost three-quarters of his wealth!

He had a trust fund that kept him in champagne wishes and caviar dreams but this kind of overspending on our houses is something most of us do.

Why do we need 1,000 square feet more now than we did four decades ago? Are people getting bigger?

The next time you go to make a big-ticket purchase like a house or even a car, ask yourself what you really need.

Lesson Learned: I’m not saying utility is the only factor in buying a home but is bigger really going to make you happier?

How to Manage a Debt Mistake

Debt mistakes don’t have to mean a lifetime of skimping and saving just to get back to even. We shared four debt payoff stories last week of people that paid off more than $100,000 in debt in just over a year.

The first step is always realizing what went wrong with your debt blunder and admitting you made a mistake…something like an AA admission for overspending. Don’t be ashamed. We’ve all been there and the daily onslaught of commercials doesn’t make it any easier.

Understanding your debt mistake and how to fix it has never been easier. I’ve built this blog on my experience after destroying my credit score and what it took to rebuild my financial life. Check out some of the ‘Most Recommended’ posts on the right or these 12 Books about Debt Relief and Credit Repair.

I’ve been active in peer to peer lending for years now, first as a debt consolidation borrower and now as an investor. Getting a peer loan to consolidate your debt isn’t an easy fix but can help lower your payments and rate compared to credit cards. Remember to only borrow as much as you need and only after you’ve taken a careful look at the spending that caused your debt mistake.

Debt mistakes happen to everyone. You don’t have to be ashamed of your financial fumbles but you do need to address them. The biggest difference I’ve seen following personal finance professionals is the way they manage their money mistakes. Use your mistakes as a learning experience to grow and you’ll never make them again.