Bank Lending has only just started to rebound after the financial crisis and new regulation could put it back down for the count. Can alternative forms of financing pick up the slack and support the economy?

I recently derided the banks in a recent blog post on peer lending risks for not stepping up to lend down the $2.6 trillion in excess cash they hold beyond federal requirements for U.S. financial institutions. I took the fact that only 12% of loan officers reporting a higher willingness to increase bank lending to consumer installment loans in the October Federal Reserve Senior Loan Officer Survey to be an indication that banks were just not willing to do their part in the economy.

I’ve known that increased banking regulation was also a factor in the slow growth of bank lending but didn’t know just how much. Fortunately, a few of my readers corrected me and it seems that the problem may be much worse than I suspected.

Peter Magnuson, Due Diligence Manager at Securities America wrote, “Regulations like Dodd-Frank and the upcoming BASEL III are creating capital requirements that discourage bank lending and in some cases make it downright impossible.” In fact, the number of U.S. bank branch closures hit an all-time high this year over 1,500 and more pain is sure to come as regulations hit traditional finance.

Banks were thrust into survival mode throughout the financial crisis, increasing capital at the expense of efficiency and profitability. While capital levels are getting back to normal, increased regulatory burden and the potential for even higher hurdles to come may limit the future of traditional bank lending. 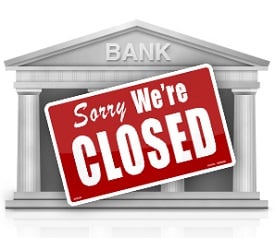 The Dodd-Frank Wall Street Reform and Consumer Protection Act is likely the most comprehensive reform of banking since the Great Depression. The act was signed into law in 2010 but is so massive that only 220 of the 398 total required rulemakings have been finalized as of October 2014.

Dodd-Frank impacts the ability of banks to make mortgage loans. The Qualified Residential Mortgage (QRM) requires a minimum of 20% down from borrowers and high credit standards. Loans not meeting QRM standards are subject to higher risk retention requirements, making them harder to sell into the secondary market.

Probably the biggest new burden on bank lending will be those brought on by the Consumer Financial Protection Bureau, the new agency empowered by the Dodd-Frank Act. The agency has authority to require reports or “other information” from any bank at any time including additional HMDA data and small business loan data. This, along with other regulatory requirements will significantly increase the staffing needs at banks. While the bureau is only supposed to affect banks of $10 billion or more in assets, the focus on retail consumers imposes significant compliance costs on everyone.

The Third Basel Accord is a global, voluntary regulatory standard on bank capital adequacy, stress testing and market liquidity risk. The Federal Reserve Board of Governors announced in 2011 that it would implement substantially all of Basel III rules and approved a proposal for the U.S. version in 2013.

Community banking is subject to the final Basel III rule at the beginning of 2015 and will be in a phase-in period until 2019. As with Dodd-Frank rules, the requirements are only supposed to affect banks of $10 billion in assets but could burden the entire financial system. Basel III defines regulatory capital more strictly with explicit standards for Tier 1 common equity capital and will likely be applied to all U.S. banks.

Because of the potential for more volatility in capital, due to the inclusion of unrealized gains and losses on available-for-sale securities, banks will likely hold more capital than is necessary to avoid a shortfall.

Mr. Magnuson elaborates the situation with, “Smaller community banks may have an issue keeping their post-provision net revenue (PostPNR) at profitable levels while their Pre-provision net revenue (PrePNR) is getting squeezed. I would keep a very close eye on a bank's ability to maintain their PrePNR levels while not sacrificing credit quality. Once a bank has to loosen its credit standards to keep up their PrePNR, we're in another danger zone.”

Where does Lending go in America?

As the owner of two blogs on crowdfunding and peer lending, I would like to say that the two industries are filling the financial gap left by a weaker banking sector. Growth in capital raising and lending seem to corroborate this to a point.

A year after the passage of Title II of the JOBS Act was passed more than $217 million has been raised in equity and debt crowdfunding. The two peer lending platforms, Lending Club and Prosper Marketplace, are now originating more than $560 million in personal loans every month. In fact, it took Prosper nearly a decade to originate its first $1 billion in loans. This year it originated its second billion in loans in just six months.

Both new forms of financing could be ready to see growth boom higher. The passage of Title III of the JOBS Act will open crowdfunding investment to non-accredited investors, those with net wealth under $1 million and with income under certain limits, could increase the potential investor pool by 58 million households according to Census data. Lending Club recently increased its target to $650 million for its upcoming initial public offer of shares which would value the company around $4 billion. The increased media attention could go a long way to bringing more investors and borrowers to the peer lending platforms.

Business Development Companies (BDC) like Fifth Street Finance Corp. (FSC) and Ares Capital Corporation (ARCC) have been beneficiaries of the weaker lending environment at traditional banks. The investment companies have profited from low interest rates on debt to loan out to small and medium-sized businesses looking for capital funding. Fitch recently lowered the sector’s outlook to negative for 2015 on rate exposure, especially on increased balance sheet leverage in the group.

A likely scenario is that banks will continue to evolve to meet the changing regulatory environment. There will be pressure to consolidate banks and grow assets but this was happening before the financial crisis as well.

Mr. Magnuson believes that smaller banks, “are going to go one of two ways, it all depends on how they're able to handle the elimination of Tier III capital and the other restrictions on Tier's 1 and 2. A major part of this is the elimination from Tier II of trade financing. All of this could lead to the massive growth of shadow banking leaving the OCC on the outside, which in the long run could be a really good thing. This would cause major consolidation of the current banking industry.”

Dan Laird, CFA of the Federal Home Loan Bank in Des Moines says that while he is not hearing regulatory burden as a reason for limited lending growth at the banks he visits, there is talk that it will be difficult for smaller banks to employ the staff necessary for regulatory burden. Slightly more optimistic for community banks, he writes,“Smaller banks are profitable and surviving albeit I am sure it is difficult. I don’t see a hard and fast asset cut-off below which a bank cannot survive. It will likely just result in decreased profitability for the small bank.”

Decreased profitability does not make for the best outlook for investors in regional banks though some opportunities may present themselves with the potential for major consolidation. Smaller banks under $100 million in assets may be the best targets for consolidation though they may also get hit the hardest by increasing costs. Investors may want to diversify their portfolios to larger banks that can withstand the increased burden or into other alternative forms of lending.