We saw last week how rates on payday loans can approach 500% and the real cost of cash advances. Today I thought we would look at how much bad credit loans actually cost when you factor in all the interest payments.

While rates on bad credit loans don’t even come close to those from payday lenders, you’ll still be looking at spending thousands on interest in just a couple of years. The good news is that there are ways to increase your credit score quickly and even loans on bad credit can help you build a better credit score.

The first thing to remember is that bad credit loans don’t necessarily mean you have bad credit. That sounds confusing but understand that a credit score below the ‘prime’ cutoff of 680 is usually considered poor credit by lenders. 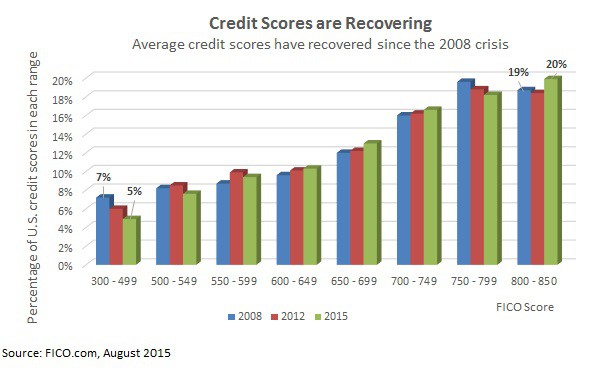 So while credit scores are increasing from the drop we saw during the 2008 financial crisis, there’s still a huge need for bad credit loans. I highlighted two lenders I have used in my Top 10 List of Personal Loans Sites, Avant and Prosper.

Lending Club peer lending accepts borrowers with a credit score of 640 or higher with rates starting as low as 6% for its loans. The website is part of the peer lending phenomenon that matches borrowers directly with investors, cutting out the banker middleman and saving on costs. These cost savings are helping peer lending to double nearly every year and I think getting a peer loan will be as traditional as going to the bank for cash in the next five years.

will accept borrowers with a credit score as low as 580 FICO on its loans. This still leaves out about 17% of the population with a credit score below the cutoff but most people will be able to get a loan. One of the best features about Avant is that it doesn’t charge an origination fee, up to 5% on most other sites. This cuts down on borrower costs even though Avant rates are higher than the peer lending option.

How much will that Bad Credit Loan Cost?

Loan rates jump pretty quickly for online loans even on sites with lower average rates. I pulled data for loans through June 2014 on Prosper to find the average interest rate according to a borrower’s average credit score.

Rates start pretty low around 6% for borrowers with an average credit score of 750 FICO but go as high as 27% for the riskiest loan category. A credit score from 680 through 720 is generally considered good credit while anything under 680 would be bad credit. Scores above 720 FICO are very good credit and will get the best rates. 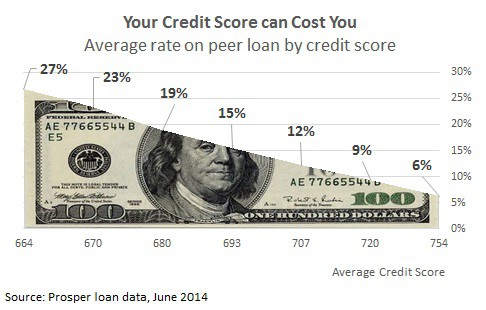 Now drop your credit score down to 660 for a bad credit loan and your payment will jump to $153 per month with a total interest cost of $4,160 over the five years.

Improving your credit score just 30 points could mean saving $2,000 on the loan!

How to Boost Your Score and Save on Bad Credit Loans

It turns out, it isn’t too difficult to improve your credit score enough to get out of rates on bad credit loans. It takes an average of nine months for your FICO score to fully recover from a missed mortgage payment though it will take between three to ten years to recover from worse events like a foreclosure or bankruptcy.

Checking your credit report for errors should be your first step. A missed payment can drop your credit score by as much as 100 points so make sure there’s nothing on your report that shouldn’t be there. All three credit bureaus have a process for disputing a negative remark and they’re required by law to investigate every dispute you make.

If you’ve got any debt that is past due, call the creditor or collection agency to negotiate. Offer to pay the debt or even a portion if they will have the late payment taken off your credit report. They might tell you it’s impossible at first but they will do it if you bargain hard enough. Just getting one negative remark off your credit report can boost your score by 20 – 50 points.

Call your creditors and ask to increase your spending limit. This doesn’t mean you should rush out to spend more but having a higher limit will improve your debt-to-available credit which is an important measure for your credit score. Continue to pay down the debt on your credit cards and your score will improve within a few months.

You can easily improve your credit score 30 points within six months and save thousands on bad credit loans. I posted a complete list of 21 steps to fix your credit score on PeerFinance101. If need money immediately, take out small three-year loan you can repay in six months and then reapply for another loan with your higher credit score. Most personal loans do not have a prepayment penalty and Avant doesn’t charge an origination fee which means there’s no downside to taking out multiple smaller loans instead of one big loan.

Check your rate on a loan from Avant now, won't affect your credit.

Bad credit doesn’t mean you’re stuck with bad credit loans forever and really doesn’t even mean your credit score is that low. Four out of ten Americans have a credit score below prime but improving your score is just a matter of knowing the process. Understand how to get best rate and how to use it to improve your score.