Is there any four-letter word as bad as debt? No other expletive even comes close to the damage that debt can do on your wallet and your psyche.

Paying off debt can seem like a life-long goal sometimes, getting to where you can see light at the end of the tunnel only to get set back by a financial emergency. At that rate, it can take years to pay down your debt and you may never get there if you can’t find the motivation to stick to your debt payoff plan.

The only solution for some may be to pay off debt fast, putting together a system you can follow and that gets you out as quickly as possible.

While you may have tried complicated systems to pay off debt before, try getting back to the basics to ditch your debt.

The Simple Steps to Pay off Debt Fast!

There are more debt payoff systems than I can count. Every website and blog has their own fool-proof steps to pay off debt fast. They are all deceptively simple until you actually try to stick to them and find changing your money habits harder than you expected.

I’ve boiled the debt payoff systems into four steps, the most basic ideas in getting debt free. These four steps may not cover every contingency but will make debt payoff as simple as possible.

I know it’s probably not the magical debt fix we all want but any real debt payoff system has to start with spending. Unless you can find a way to start making so much money that you can buy whatever you want, you’ve got to help yourself out by not spending money you don’t have.

We all love to spend money. Billions are spent on commercials to draw us in like a moth to the flame. The problem is that a lot of the stuff we buy every day amounts to shit we don’t need, that’s why I call it shtuff.

If you are ever going to pay off debt, start with not creating new debt by spending more than your income.

OK, easy right? I’ve made enough money mistakes and debt disasters to know that it’s not.

Start with putting together realistic financial goals and a budget you can keep. That means not trying to cut your spending to the bone suddenly just to fall off the wagon within a few months. I was working three jobs and saving every penny in my 20s only to put myself on the financial equivalent of yo-yo dieting.

Debt Payoff Step 2: Rank your Debt for a Fast Payoff

There are all kinds of debt payoff systems out there. Some are as easy as budgeting an extra payment each month while others rival NASA rocket science in complexity.

Don’t make paying off debt more complicated than it needs to be.

Once you have a debt strategy, you can start to tackle your debt with anything left in your budget every month. Don’t get discouraged if there isn’t much left in your budget for extra payments. Even an extra $15 a month can save over $5,000 in interest over the life of your mortgage and pays the debt off early. 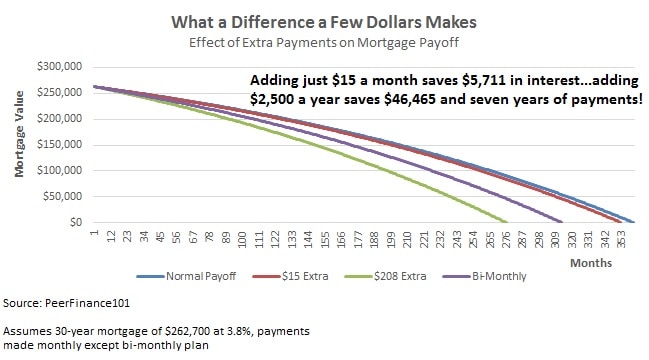 Debt problems and high interest rates seem to go hand in hand. Overspending and debt lead to missed payments which destroy your credit score. Lenders are more than willing to help you get in over your head, they just increase the interest rate on any new credit you want.

Pretty soon, you’re paying more in interest than you borrowed in the first place.

I’m not a believer in the debt-free lifestyle. Debt is a financial tool and can help you do a lot of things when used wisely.

But that means improving your credit score so you can get the debt you need at rates you can afford.

Apply for a personal loan of up to $35,000 from PersonalLoans.com

Debt Payoff Step 4: Create a Plan…and Stick with It

Your debt payoff dream doesn’t have to be some elaborate plan that makes you debt free overnight. Spending habits are so strong that they can be almost a part of our personality so it’s going to take time to change. 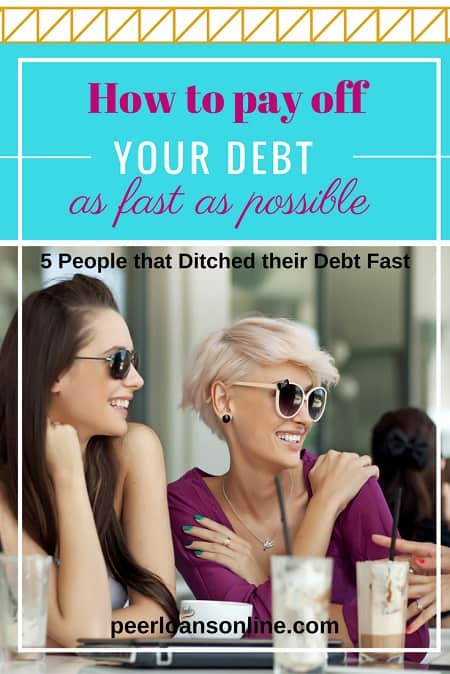 Start with your budget and understand how much you can realistically save each month. Try making smaller goals like cutting an extra $50 out of your spending each month. It may not seem like it but that extra $50 against your debt can go a long way.

Budget in a reward every few months, something you can do to congratulate the family for saving more money and paying off debt. Don’t go overboard and spend everything you saved but do something special. Make it a point to talk about how much the family has saved and how much debt has been paid down.

One of the best ways to motivate yourself for paying off debt is to follow some of the amazing debt payoff stories from others. I’ve highlighted four stories below from some of my personal friends plus my own debt payoff story.

4 People that Beat their Debt Fast

Monica shares on Our Debt Free Family how she and her husband paid off $65,000 in debt in less than a year with many of the debt payoff steps outlined above. She and her husband had been paying down credit cards and student loans regularly but then put on more than $319,000 of debt when they bought a house in 2009.

It wasn’t all bad debt but wasn’t going to allow Monica to spend as much time with their new baby. They hadn’t planned on Monica being a stay-at-home mom and it wasn’t going to be possible unless they seriously attacked their debt.

They listed out their debt, cut expenses and sold whatever they could. It meant becoming a one-car family and taking extra work when it was available but they were able to pay down more than a fifth of their debt in less than a year.

Holly and Greg have turned their debt payoff experience into a whole new life with Club Thrifty, a website on frugal living and living within your means. They managed to pay off their credit cards early in their marriage but just were not saving very much on their combined $40,000 income.

They started clipping coupons and watching were every penny was spent. Just tracking where their money went and budgeting helped them save $12,000 during a year, all while having a second child, going on vacations and still living happily.

David and John had their aha-moment after racking up $51,000 in credit card debt trying to keep up with their idea of the perfect life. When all the material excess was only piling up debt, they asked themselves two questions:

The two questions changed their lives and they are now The Debt Free Guys and have published a series of books on being Money Conscious. It’s a great story about how financial distractions can keep you from being truly happy.

My own debt story started during the collapse of the housing bubble. I had always enjoyed good credit and the low interest rates that come with it but trying to sell my rental houses before prices fell ended up destroying my credit score.

I could see the real estate market overheating in 2007 and decided to sell my five rental properties. I was able to sell three fairly quickly but two houses sat on the market far longer than I had planned. I maxed out my credit cards to pay mortgages and expenses but it wasn’t enough, I ended up missing a couple of payments and saw my FICO score drop from almost 800 to just 620.

Rates on everything from credit cards to personal loans shot up and I was locked out of the credit game. I was able to sell the remaining properties but the damage was done. Fortunately, through a debt consolidation loan and some of the other steps in this post, I was able to fix my credit in just under four years. I still carry student loan debt, it’s refinanced at 2.75% so I’m in no hurry to pay it off, but we paid off our mortgage and pay off the credit cards every month.

Steps to pay off debt come in all shapes and sizes. There are more debt payoff systems than I can count but the most basic steps are always the same, spend less and put a little extra to paying down credit each month. It’s only simple until you try to do it and find yourself falling back into old spending habits. Get a little motivation from some of these real debt payoff stories and stick to your goals. You’ll be able to pay off your debt fast and will be financially happier.